Well, life has been pretty interesting for me lately. Jason and I moved! We made it, but not without hard times. When we first got here, we had problems with Uhaul. They were jerks over at the store. Then we moved into this little bedroom in someone's house. Which is fine besides the fact that we found out that we had thousands of little tiny roommates with us--yes--fleas. HOW AWFUL! We got rid of them, but not until after we got tons of little tiny bits all over us. We are itching like crazy. Then on top of everything, during the move, Jason lost his wedding ring. We are so sad about that!

On a good note though...I made it onto two creative teams in the past couple of weeks. I am working on Alma Townsend's personal creative team and 2BScrapped's site creative team. I am so excited. It is going to be so much fun working with all these talented ladies creations!
Posted by Jason and Jessica Bills at 2:16 PM 2 comments:

A Place to Live

Well, we finally found a place to live for the next two month--or until our house is finished. We are going to be moving into a family's house in the area we are moving to. I think that it is going to be fun because it is going to force me to make some friends out in Portland. I hope that it will be a good experience.

Well, I finally got to meet my neices and nephew. They are so cute! I had so much fun with them. I think that they had fun with Jason and me too. Jason one day was saying "boo" to Rowen and scaring her, and her mom came in an asked if Jason was silly. So the rest of the trip she would just randomly say "Uncle Jason is silly; he said boo". It was so cute. Then she started to say "Boo...I scared you." It was super cute!

The first night we were in Utah, I met Mike, Jason's brother, and his family. His girls were really shy the first night, but then they became very talkative. They got to the point that they were specifically requesting to sit next to me and Jason at meals. One meal we went to was at McDonalds and the girls got little toy animals. They just played with those for hours. Amanda loves giraffes and that is what she got. So she was excited. 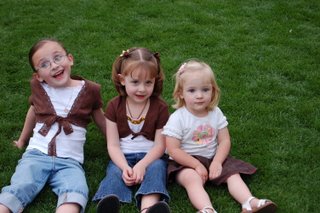 Lindsey is so cute! Talk about a girl that knows fashion! She picks out her clothes and shoes. Her outfits are so cute! I wish that I had the same fashion sense that she has.

Elliott was just plain old cute! He would just sit and smile. He has such a cute face. I just love sitting there and playing with him. He still doesn't crawl, so he just rolls around to get things. It is so cute. 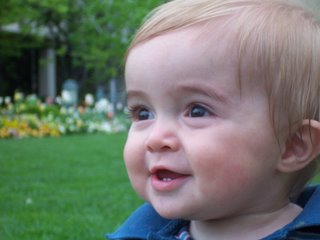 I am going to miss the family. I had so much fun getting to know them (FINALLY)!
Posted by Jason and Jessica Bills at 1:18 PM No comments:

Well, Saturday was Jason and my anniversary! I can't believe that it has been a year already.

We spent most of the day with the Bills family. It was so much fun finally meeting all of the in-laws! I have such cute neices and nephews! I got to meet everyone by Saturday afternoon. We went to the Spagetti factory at about 5:30, but no one really ate because Jason and I already had dinner plans some where else, Sue and Julie just ate, and all that was left was Jess and Jared. So we had this pretty big group and only 2 people eating. I felt bad for our waitress. 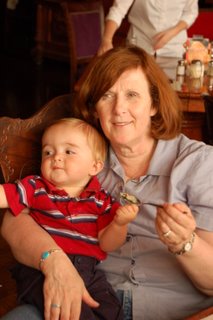 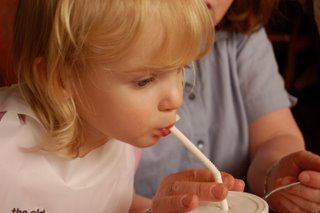 This is Rowen chewing her straw. 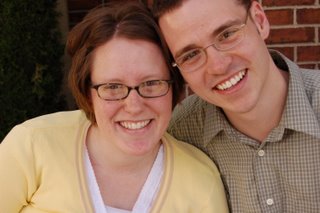 At 7:00, Jason and I split off from the rest of the group. Jason suprised me by taking me to my favorite resturant, Chef Tom's (aka Franchesco's) . He had a table set up towards the back with candles and a rose. The lights were really dim too. They had most of the back area empty so we were alone most of the time. Can you believe--I had a romantic anniversary dinner??? It was so sweet of Jason. 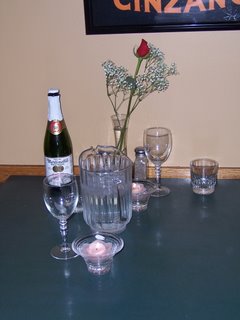 After dinner, we went to Salt Lake and saw the new Joseph Smith movie. It was so good! After the movie, we went out and walked around the temple. It was a great anniversary! I am so proud of Jason for being romantic! 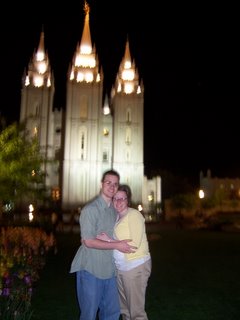 So sad that this picture is blurry! We had some other couple take it. Oh well!
Posted by Jason and Jessica Bills at 12:46 PM No comments: